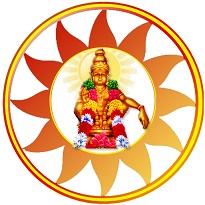 SRI ANNANAGAR AYYAPPA TEMPLE which is located on Plot no.C-45, Second Avenue (New No.X42 6 th Main Road) in a central place on a 40 cents land near the Visveswarayya Tower allotted to Sri Ayyappa Seva Samajam registered under Society Act 1976 under Societies Act 1959 by the Tamilnadu Housing Board during the year 1979. The entire cost of land was paid for by the members. Samajam was formed as a secular body consisting of members from Hindu, Christian and Muslim communities and with social and charitable objectives. The Samajam immediately after taking procession of land from Tamilnadu Housing Board commenced a full fledged medical centre in a thatched shed and offered free treatment to patients. Annadhanam was also offered periodically to poor needy people. Members then expressed their keen desire to have a place for prayer and to foster universal brother hood as their devotion to Lord Ayyappa on whose name Samajam was formed. Accordingly members pooled their resources and started contributing small amounts every month to build Ayyappa Temple in a portion of the land, Many members gave monthly contribution of Rs.10/- to Rs.100/- for this purpose.

By continued efforts by members they were able to mobilize about Rs.3 Lakh which formed the initial source of income for building an Ayyappa Temple to fulfill the Samajam members long felt desire. In recognition of the charitable activities of Samajam like poor feeding and other social charitable activities Income Tax department has granted exemption to Samajam's income under section 12A . This Temple was built and is being managed by Sri Ayyappa Seva Samajam, Annanagar (SASS) founded in the year 1976 on 20th June by a group of determined Ayyappa devotees in and around Annanagar, Chennai.

In the beginning there was only a make shift Temple in a thatched shed along with a charitable medical centre in another shed. With the enthusiastic support and commitment and five years of relentless efforts of the members of SASS backed by an abundance of divine grace, construction of a full fledged sannidhi, in consultation with the renowned vasthu architect Sri.Kanipayyur Krishnan Namboodiri conforming to the traditional shastraic stipulations and designed in typical Kerala style was completed in May 1984.

The kumbabishekam and consecration of the Vigraha were performed on 13 th May 1984 by renowned thantri late Sri.Abli Krishna Vadhyan Namboodiri assisted by Brahmasri K.M.Kesva Battatripad, former Chief Priest of Sabarimala Temple. Simultaneously, consecration of the vigrahas of sahadevatas Lord Ganesha and Subramanya, Goddess Durga and Sri Anjaneya was also performed by the Tantri. Later a Navagraha shrine was also added .The main sannidhi of Lord Ayyappa is facing west situated inside the Chuttambalam with Lord Ganesha sannidhi and Subramanya sannidhi to the left and Goddess Durga sannidhi to the right, all facing the East. The Navagraha Sannadhi is located on the South East corner and the Anjaneya Sannadhi in the South West corner. A Natamandapam - a unique architectural and structural marvel - with an imposing Gopuram was added during the year 1989.

During the year 2005 gold covering of the Dwajasthambam and 27nos. Thazhikakudams with about six kg. of gold was completed. The Dwajasthambam installed in this temple is made up of about 22 paras or segments. A special kumbabishekam of the gold covered Dwajasthambam was performed on 20 Th June, 2005. The main door to Ayyappa Temple also was covered with brass plates.

There is a spacious and well ventilated auditorium of about 3600 Sqft floor area named after Sri Adisankara for conducting spiritual and cultural programmes and discourses. The unique design of the auditorium incorporates the "Koothambalam" style of Kerala temples and matches perfectly with overall architectural style of the sannidhi. Sapthahams & discourses by eminent speakers on religious and spiritual topics are held regularly. These discourses help in spreading the message of universal brotherhood and love among the public. Some of the eminent speakers who gave discourses on religious and spiritual subjects in this auditorium include Prof. Vaidyalinga Sarma, Venmani Krishnan Namboodiri, Anjam Krishnan Namboodiri, Swami Asheshanandji and Adhyatmananandaji, Sri Sri Muralidhara Swamigal, Shyam Namboodiri,Ramakrishnan, Mrs. Prema Pandurangan, Ravi Kashyap, Swami Udit Chaithanya, Dr. N. Gopalakrishnan, Sri Gopala Valli Dasar,Sri Kesava Vaajapeyar, Sri Narayananji, Ect.,

The Samajam was also having 80G exemption for more than 6 year in the formative years.

During the Mandalam / Makaravilakku season, members, their relatives and friends throng the Temple for Darshan, Maladharanam and Kettunira. The Lord Ayyappa Temple is acclaimed as one of the well maintained ones in Chennai City.

The Mylapore Acadamy had given the Award for Best Maintaining Temple to Annanagar Ayyappa Temple.